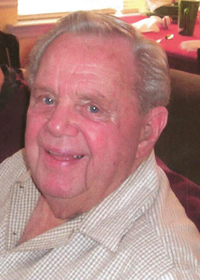 Macon W. "Pat" Patteson, M. Sgt. USMC Retired, age 93, passed away April 29, 2013 at Kessler's AFB Medical Center Biloxi, MS. Mr. Patteson was born in Clifton Forge, VA. on October 25, 1919 to the late James Macon Patteson and Helen Woodward Patteson. He had retired from the US Marines as Master Sergeant after 23 years service serving during WWII and Korea. After retiring he received his degree in restaurant management. He was past manager of Poplar Forest Recreation Center and was a tour volunteer at the Thomas Jefferson Poplar Forest Home and was a world traveler.

Survivors include his wife of 40 years, Twila Ann McCormick Patteson of Indian Trail, NC. 3 Daughters, 1 stepdaughter, 2 stepsons and several grand and great grandchildren. He was preceded in death by a daughter, 2 brothers and 1 sister.

To order memorial trees or send flowers to the family in memory of Macon W. Patteson, please visit our flower store.