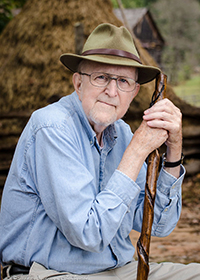 Mt Holly, NC - Mr. Joe David Robinson, 72, of Mt Holly, NC died July 12, 2014 at the Robin Johnson Hospice House after a long battle with cancer. He was born November 7, 1941 in Gaston County to the late Ralph David Robinson and Lula Staton Robinson. He was also preceded in death by his sister Sue Cooper and is survived by nieces and cousins.

Joe Robinson was a deacon and a lifelong member of Goshen Free Will Baptist Church and he was a man strong in his faith of Jesus Christ. As a Christian man, he certainly set the example for others to follow. In 1963, he started his career as a barber in Stanley, NC and later opened his own shop in Mt. Holly in May of 1969. As a hairstylist, he was known by many both far and wide.

Joe loved music, especially gospel music and played a variety of instruments which he learned by ear including the guitar, violin, keyboard, autoharp, banjo, and harmonica.

Joe was also an accomplished photographer best known for his wedding photography and specifically his acute attention to bridal portraiture and posing. He was known throughout the state for these specific skills and Joe was always eager to teach others the skilled craftsmanship of artistic, traditional portraiture. Joe was a member of Professional Photographers of America for 34 years. As a member of Professional Photographers of North Carolina for over 35 years, Joe achieved his Craftsman Photographer Certification and also was awarded his Fellowship achievement. He also served as a past board member and he chaired the Western Guild Seminar. He never tired of learning and was always on the front seat at every event and recently was working as a digital photographic artist. He was an amazing man that touched the hearts of many and will be missed.

Funeral Services to celebrate Joe's life will be held at 7 PM Tuesday at Goshen Free Will Baptist Church with Reverend Clayton E. Burch officiating. Interment will be held at 10 AM Wednesday at Hillcrest Gardens Cemetery. Visitation will be from 5-7 Tuesday also at the church. In lieu of flowers, donations may be made to the Joe Robinson Memorial Fund made out to Goshen Free Will Baptist Church, 1300 W Catawba Ave, Mt Holly, NC 28120.

To order memorial trees or send flowers to the family in memory of JOE DAVID ROBINSON, please visit our flower store.