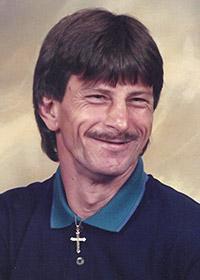 Danny Lee Thompson, 57, of Gastonia went to be with his Lord and Savior on April 1, 2014 at the Robin Johnson House in Dallas. Danny was born on August 13, 1956 in Anderson, SC to the late George W. and Sybil Tippins Thompson. He was also preceded in death by a son, Josh Thompson, brother, George Thompson and a sister Joann Caldwell. He was also a member of Ranlo Church of God. He had a great love of the outdoors, gardening and working on small engines. He loved his family and friends and will be missed by all who knew him.

Funeral Services to celebrate Mr. Thompson's life will be held at 2:00 PM Friday April 4 at Ranlo Church of God with Rev. Johnny Sawyer and Pastor Jerry Willard officiating. Interment will follow at Greenwood Cemetery in Belmont. Visitation will be 1 hour prior to the service.

The family would like to thank all of the staff and nurses of Hospice and would like Memorials be made in Danny's memory to Hospice of Gaston County, PO Box 3984, Gastonia, NC 28054.

To order memorial trees or send flowers to the family in memory of Danny Lee Thompson, please visit our flower store.