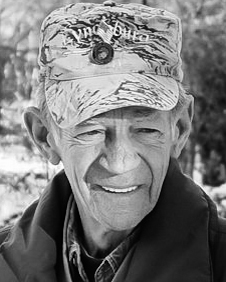 Bobby McClure, 82, of Davis Park Road in Gastonia, died August 17, 2017 at the Robin Johnson House in Dallas. He was the husband of the late Nancy Johnson McClure and the son of the late Thomas and Stella Dills McClure. He was born on July 25, 1935 in Gaston County. Bobby was a loving husband, father and grandfather. Bob proudly served in the US Marine Corp during the Korean Conflict. After his military duty he returned to Gastonia to begin his employment career. He eventually became a machinist and rose into management positions working in a variety of companies in the Gastonia area. He was a former member of Olney Presbyterian Church serving as a Deacon and used his beautiful bass voice to sing in the church choir. His love for music also included playing his harmonicas which he would do for hours. Bob always had a kind word for others and everyone enjoyed his sharp witted humor. His love for animals was well known and he had a special love for his Pomeranian "Babe" that was his steadfast companion. Survivors include his son Jeff McClure and wife Janice of Mt. Holly, NC. Daughter Jane McClure Smith and husband Paul of Virginia Beach, Va. Nine grandchildren, Malinda McClure Carrubba and husband Joel, Jonathan McClure, Michael Schroeder, Brandon Schroeder, Paul "LP" Smith and partner Teresa Ramos, Christopher Smith, Chris Yelle and wife Mandy, Don Yelle and partner Ivana Karlsen and Sean Bradley. Four great grandchildren, Jaxson Carrubba, Chesney Carrubba, Erica Skipper and husband Logan and Ashley Yelle and also three great-great grandchildren, Easton Skipper, Dawson Skipper and Aiden Smith. The family wishes to thank the staff of the Robin Johnson House for their compassion and heartfelt care given to Bob. The staff was a true blessing to Mr. McClure's family. Please in lieu of flowers make contributions to the Robin Johnson House % Hospice of Gaston County, PO Box 3984, Gastonia, NC 28054.

To order memorial trees or send flowers to the family in memory of Bobby Edwin McClure, please visit our flower store.